Continuing my reports from the IFLA/ World Library and Information Conference taking place in Milan, Italy and specifically giving the 2nd report on yesterday's session organised jointly by the Information Literacy and Literacy & Reading Sections of IFLA. I took shorter notes than for the 1st section: basically the whole session was 3 and quarter hours with no coffee breaks and although there were NO draggy bits and time flew by, I think my brain and fingers were tiring after a while. As before, the full papers are online and I have linked to them through the paper titles.
First talk in 2nd segment was from Saiquil Islam (BRAC, Bangladesh), talking about Community Learning Centre (CLC): Developing a learning society in Bangladesh. Literacy rate in Bangladesh is 47% and net enrolment is in secondary schools is 53%. There are ess than 100 public libraries for 144 million people. There is an information divide between urban/rural, rich/poor, women/men, and access to internet is not common. BRAC (Bangladesh Rural Advancement Committee ) has 121,000 staff and covers programmes in Education, health, social empowerment, and legal empowerment. It launched CLCs in 1995 and they are multipurpose: for example mobile library (in a rickshaw), children's corner, skill traing and socio-cultural activities. 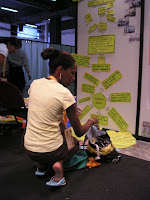 The community itself has to contribute to found them and keep them going, and there are now 2,170 CLCs (so by far outnumbering conventional libraries).
All the librarians are women, which is a valuable new role for females in rural areas, and 1m people outside previous library catchment are being reached, about half women. This shows that the community is willing to support these needs, but not yet enough, because this still only covers a minority of the population. There was a question about - what happens to the library service: it seems that libraries (those outside the CLCs) were seen as more limited and specific in function, and not able to reach out to much of the population.
Secondly Kim Moody (Queensland University of Technology) talked about A constructivist approach to media literacy education: the role of the library. She started by defining media literacy, notably as the “ability to access, undertsand evaluate and create media content” (European Commission, 2007). She did a postal survey of 586 people in Brisbane, looking at whether people who were sceptical about the media used different media from those who trusted it. It turned out they used pretty much the same sources. So then she thought how the use of media may be more related to the specific need. Therefore the ability to identify your own needs should be part of media literacy and implies a constructivist approach to teaching media literacy.
This leads to a second point, the need to have more media literacy training aimed at adults (rather than, as at present, mostly aimed at children), both because they have different needs and because the media changes over time (i.e. through people’s lives). Obviously this all ties in with the spirit of the Alexandria proclamation etc.
I would also say that the SCONUL 7 Pillars of information literacy includes (as do some other framworks) "Recognising the information need" which I would interpret as including the ability to identify what kind of media is suited to your needs. Someone stated that they felt this "recognising" was not so relevant in a situation where media is being pushed at you. However,I feel that even in that situation, conscious competence in identifying whether or not something matches a need is helpful. 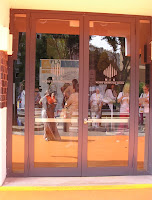 In response to a question, Kim said that North American studies had shown that there were differences in media uses between the sceptical and trusting. She thought that the difference between America and Australia might be to do with the differences in media ownership, with only a couple of owners dominating the Australian scene. The Gallup report at http://www.gallup.com/poll/103300/quality-integrity-worlds-media-questioned.aspx was circulated during the discussion time, and it shows some interesting differences in attitude towards the media between countries.
The discussion in my group afterwards was concerned with the challenges of educating adults in media literacy, since there are issues of values and attachment (e.g. feeling that a newspaper expresses your values, so not appreciating someone telling you it is not trustworthy). There was also discussion of the different media situations in different countries and what impact that had. I forgot to say before that my discussion group was facilitated ably by Lesley Farmer.
The photos show two of the poster presenters preparing yesterday, and the entrance door of the conference centre.
Posted by Sheila Webber at 14:55

IFLA is the International Federation of Library Associations and Institutions, it is the global association for libraries