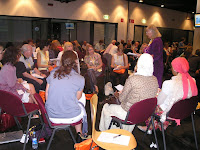 This is the 3rd and final report from Monday's 21st Century literacies session at the IFLA/ World Library and Information Conference taking place in Milan, Italy. There were three speakers, and again I will link to their full papers (click the titles). Firstly Patrick Lo spoke about Effects of Online Audio-Book Resources on Library Usage and Reading Preferences and Practices of Young Learners in an Elementary School Library Setting in Hong Kong. This was his doctoral research, about use of online audio books and use of the school library. The sample were 11-12 years olds who were already good readers. He administered two sets of questionnaires, at a 5 month interval. 260 out of a possible 310 questionnaires were returned. Children were encouraged to use the Naxos spoken word online library, and there was log data from this resource. The online books were used book in school and at home, and there is information on length of sessions etc. in the paper. Contrary to hopes, frequency of use of library was slightly decreased, and students did not see the library as more fun after using the books.
The next speaker, Leone Tiemensma (Midrand Graduate Institute, South Africa) spoke on Visual literacy: to comics or not to comics? How libraries can promote literacy using comics. She talked about the long history of comics and cartoons and also its characteristics. She also talked about some of the ways in which comics support developing literacy and the ability to construct meaning (e.g. the pictures are part of describing context and meaning and these have to be decoded). Specifically in South Africa, there is reluctance to engage with texts, and graphic novels can provide way of engaging with ideas, history, literature. Also there is the fact that there are people with different first languages and this also puts the emphasis on using pictures to cross boundaries. English is lingua franca, everyone has to know it and it is seen (e.g. by parents) as the language you use to get on in life. Comics present English in a less daunting and more engaging way (from that perspective, Tiemensma was seeing it as a starting point; something you move on from - some others felt it was a destination for adults, too). Less than 50% of schools have libraries.

The third paper was Promote Popular Cultural Literacy throughout the Countryside in China from Huang Qunqing and Xu Yixing. The presenter started by defining this concept as a state or condition of studying or enjoying cultural works that are popular with most people. The are 1.3 billion Chinese living in rural places, spread through 56 nationalities with many cultural traditions, and part of this may be a preference for watching rather than reading. From a survey in 2000, playing cards or watching TV were most popular, with low use of/access to libraries. There differences between urban and rural areas. The cultural project started in 20002 and has already reached 60% of people. It involves public libraries and they offer e-books, films, stage and fine arts, sightseeing, lectures music, and with particular attention to videos (with centres offering satellite receivers and projectors). There is a lot more detail in her paper.
The discussion this time started with questions of how to organise graphic novels, since one of my Masters students has found out that “in no order at all” is generally the answer. A French delegate said it was the same in her library. She had an interesting point, which was that arabic-reading populations in parts of France prefer manga (Japanese graphic novels) since Japanese is read right-to-left, the same as arabic (manga usually keeps this layout even in translation), so the layout is familiar. Lesley Farmer talked about some ways she uses graphic novels etc. e.g. getting people to create cartoons about their experience of a graphic novel. There were also discussions about who chooses material that goes out on cultural initiatives.
So this was the end of the session! It was a great job from the session chairs, as it was a complex timetable, and most of the speakers had to be kept to 10 minutes. After all this I was ready for a cup of coffee ;-)
The pictures show Lesley Farmer chairing our group, and one of the posters in the exhibition, from Heike vom Orde
Posted by Sheila Webber at 13:31