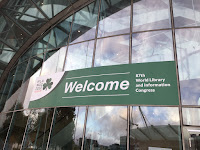 I'm at the World Library and Information Conference in Dublin and will be blogging some of the sessions. The first is: News Literacy: Fighting Mis/Disinformation at Your Library. This was a session organised by Social Science Libraries Section and News Media Section, of the International Federation of Library and Information Associations (IFLA). The moderators were Abby More, University of North Carolina at Charlotte, United States and Ann Okerson, Center for Research Libraries, United States. The session was attended by over 200 people, and when asked whether fake news was a serious issue in our country, I think everyone put up their hand. I'll blog the session in two parts. The following a just notes, and I have linked to the full text papers that give more information.

The first talk was on Training the trainers: A public library - higher education collaboration for Media Literacy education in Ireland, presented by Crystal Fulton, University College Dublin, Ireland and Claire McGuinness, University College Dublin, Ireland. They described a collaboration between academics at the School of Information and Communication Studies (ICS) at University College Dublin (UCD), and Meath County Council Libraries in Ireland, providing media literacy training for public librarians. They managed to get funding from Meta, in the form of a donation, so they could avoid pressures on what they produced. The researchers examined existing initiatives and also surveyed library staff about their needs and preferences for media literacy training, using a participatory action research approach. They then created online training focusing on the topics: Identifying and sharing good media literacy information; our data footprints; Google is not the internet; cyberbullying / hate speech; conspiracy theories. There were recommendations including having training about how to train library users. Their paper is here https://repository.ifla.org/handle/123456789/1952

The second talk was Fighting Fake News and Disinformation: a scholar experience in Latin America presented by Jonathan Hernández Pérez, Library and Information Research Institute, UNAM, Mexico. He explained that there is an initiative called  Seminar in information & society, started in 2002, which from 2016 worked on the issue of disinformation. In 2017 they launched ethical use of information week, then in 2018 they organised workshops for librarians, and webinars about information on COVID19 in 2020. They have published open access books addressing the same issues e.g. Repositorio IIBI UNAM: La posverdad y las noticias falsas : el uso ético de la información. From these Mexican initiatives they have extended to other South American countries. They noted that there seems to be a disconnect between scholarly work and people’s ideas and experience, which librarians need to address. They in particular called for research into internet sub cultures. The paper is here https://repository.ifla.org/handle/123456789/1969

The next speaker, Jelena Rajić, Public Library "Radislav Nikčević", Serbia, had been delayed because her flight was cancelled, but had made a virtual presentation on the spot (I think at the airport?) which she had emailed in (since librarians are so resourceful!). Her talk was Genuine librarians as a shield between fake information and library patrons. She started by identifying the role and capabilities of public librarians. To the existing role of providing support to people using the internet, the librarians realised that they needed to help people be aware of what information was fake. They carried out a survey of users and as a result of that decided they needed to organise critical information literacy training. Librarians used exercise, quizzes and so forth, but then the pandemic occurred and this led to new needs. The librarians helped by identifying sites providing false information about COVID19, and other guidance towards reliable COVID19 information. Her paper is here https://repository.ifla.org/handle/123456789/1960