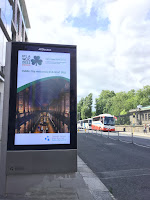 This is part 2 of my notes from the WLIC session on News Literacy: Fighting Mis/Disinformation at Your Library this morning (part 1 is here).
The next speaker was Ebele Nkiru Anyaoku, University of Abuja, Nigeria and the paper was coauthored by Ngozi P. Osuchukwu, Nnamdi Azikiwe University, Nigeria. The paper was Librarians use of information literacy strategic tools for teaching students in Nigerian universities to combat fake news and information. The speaker outlined the problem of information disorders and its impact on wellbeing: fake news spreads fear and panic and can be literally fatal if people believe health myths and false health information. Young people are certainly at risk since they access online information through social media through the day, and may not be able to identify fake news. People need a critical mindset, search skills and knowledge about quality information sources and finally the ability to evaluate information. There is an officially approved information literacy course which is used by people in Nigerian universities called GST 121 Use of Library and Study Skills. Therefore they carried out a research study to investigate whether the material being used to teach it were meeting the course's aims. They carried out document analysis and analysed websites. The review showed there was no module on fake news. They did discover media and informatiteracy modules and analysed the content. The percentage (about 11%) of material on evaluation was not sufficient, with more material on search etc. Also the library websites more broadly did not have material countering, and warning against, fake news. They recommend that e.g. fact checking, evaluating, spotting fake news should be included in modules, with revision of the GST121 course, and also the library websites should be upgraded. The paper for this talk is at https://repository.ifla.org/handle/123456789/1961

The next talk was Fighting Against Fake News: a Study of Central University Libraries in India presented by Mahender Pratap Singh, Babasaheb Bhimrao Ambedkar University, India. As with other speakers, he emphasised the role of librarians in combatting misinformation. The speaker presented research (a questionnaire survey carried out during the pandemic) into the role of librarians and their strategies in combatting fake news. The participants were from Central Universitiy libraries, and more than half the libraries responded. The respondents identified fake news as harmful. They did identify roles for librarians in identifying fake news and fact checking, and said there were offering information literacy training. A major problem was lack of support from their institution. Suggestions made by the presenter ranged from those aimed at librarians up to those aimed at government. They included institutions taking disciplinary action against those spreading fake news, and also government policies to raise awareness and control fake news. The paper is here https://repository.ifla.org/handle/123456789/1965

Finally we had a presentation on Vietnam academic libraries and fake news on social networks: revealing the truth and solving the problem by Lan Nguyen Thi Kim, University of Social Sciences and Humanities, Vietnam National University Hanoi, Vietnam. She presented some general statistics about the population and their use of internet and socal media. They had carried out a survey about how university librarians were dealing with fake news. There were 505 valid responses to the survey that they conducted. They found that those with former training and better education were better at discerning the truth and more careful when shring information. The paper is here https://repository.ifla.org/handle/123456789/1963